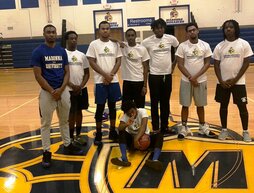 However, this does not mean that those incoming students do not enjoy playing the game of basketball. This is where intramural sports come into play, specifically basketball.
Intramural basketball was started at Madonna University back two years ago by a now Madonna alum and sports management major, Jalen Harton. Harton, with help from Madonna’s Sports Management Society club, were able to get intramural basketball off the ground, producing a successful season.

“I knew a lot of students at Madonna who wanted to play competitive basketball but were not able to play on the school team. Intramural basketball at Madonna was something that I had proposed to the Sports Management Society and the athletic department. I was able to sit down with a few members of the group who were interested in helping out and we were able to get it get it off and running. The first season was a great success and it seemed like everybody had a great time, which was my ultimate goal,” said Harton.

As Harton set the bar high with his first season of , the following year, Madonna’s athletic department met with the Sports Management Society and asked if the group could continue it the event for the upcoming school year, as Harton graduated from the university and was off to bigger and better things.

This gave another student, Jaylen Freeman, senior and sports management major, the opportunity to take the torch from his colleague Harton and continue the success. Freeman took control and stepped in the empty shoes of Harton.

Freeman was able to follow the path that Harton paved the previous year and was able to continue the event for students. Unfortunately, the event did not go as smoothly as the previous year. Freeman’s event clashed with open gym times and the Madonna men’s basketball team pushed to play, even though the rules said current Madonna basketball players could not play, as it would make it unfair for other students. This was the non-basketball team students' opportunity to play and compete in a competitive atmosphere of basketball, similar to the official basketball games.

“Unfortunately, the season did not go as originally planned. The men’s basketball team formed a team and played, which turned other students away because they assumed, they would not have a chance to win. We stilled played out the entire season, but it did not go as smoothly as the previous season,” said Freeman.

This school year, new and returning students have been clamoring for intramural basketball to make a return back to its old form. Again, Madonna’s athletic department went to the Sports Management Society looking for a student or students to step up and take the lead on the event. This year it appears it will be a group effort, as a few senior students have stepped up to take the lead and make intramural basketball great again.
​
​These students have wished to remain anonymous for the time being, until they get more information and work out the details. These students dropped a small teaser that they are aiming at the first week in November to begin the season. Keep an eye out for more information via email and flier around campus.